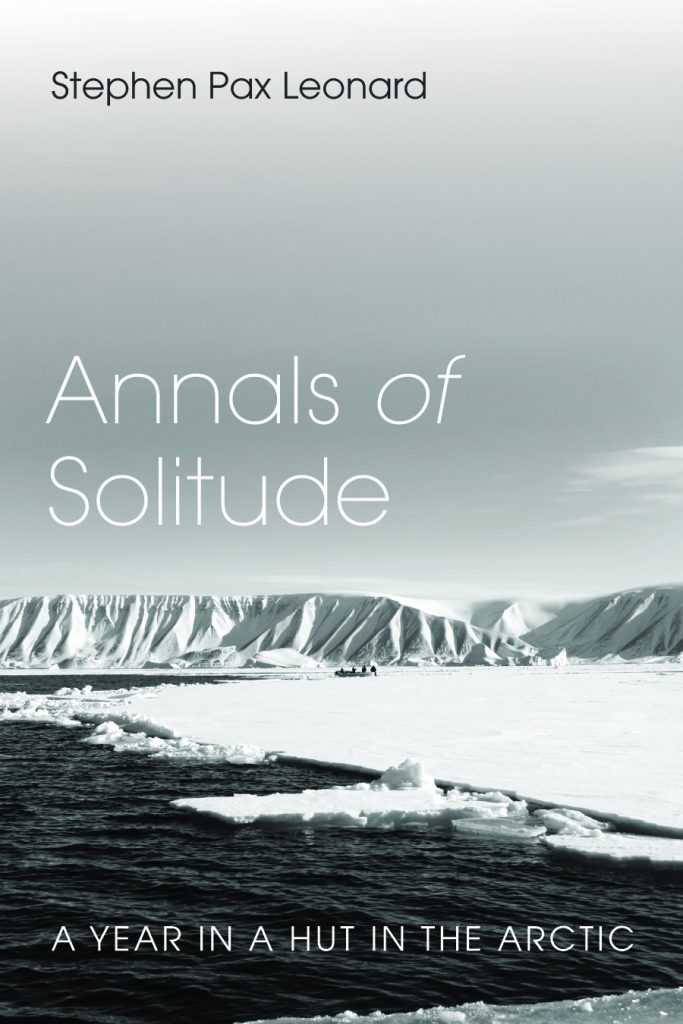 Annals of Solitude: A Year in a Hut in the Arctic

This philosophical travelogue is a record of the joys (and frustrations) of disconnecting from our complicated, modern existence and living, at a time of climate upheaval, a simple life as close to nature as possible. Eager to know what life might be like if we choose another path, Leonard lived for a year in a cabin in the most remote Arctic settlement he could find and discovered how the paraphernalia of modern living conspires to eliminate our dreams. In the manner of a flat-earther, he went to the High Arctic not just in search of the ice edge, but also to examine the boundaries of our human psyche. No longer ruled by time and blessed by transcendences that flashed him the totality of life, he found harmony with the external world led to an inner dialogue that challenged everything he had known before. Whilst sitting aloof at the top of the world watching humanity having gone astray with our actions threatening to literally change the color of the map, he put with the aid of a poetry volume the small and great into perspective. 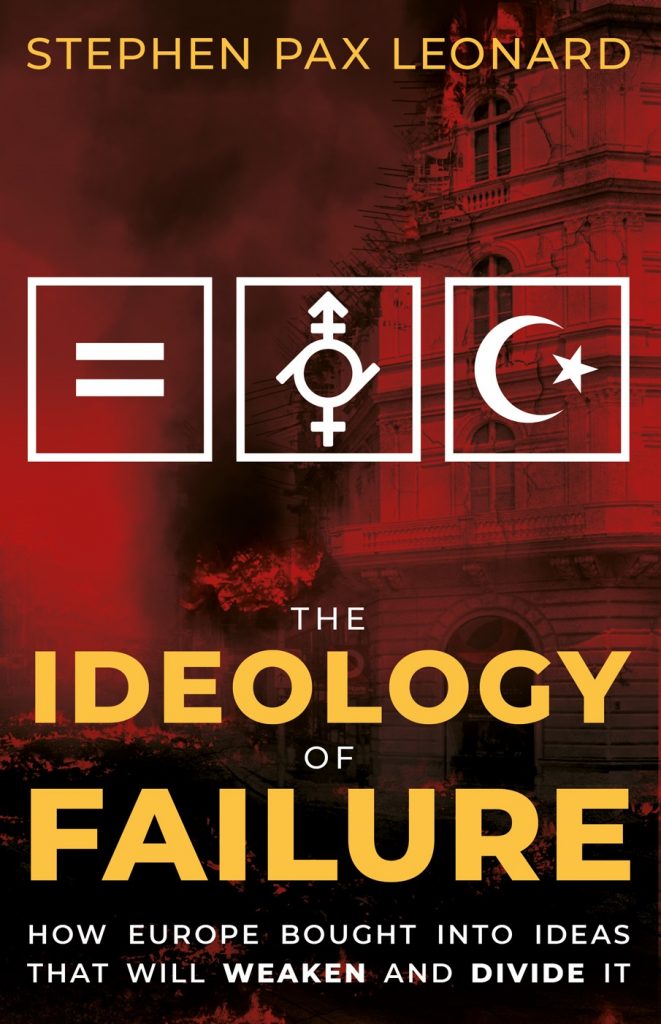 The Ideology of Failure

We are living in unnerving times. Our societies are defined by a social polarisation not known since the 1930s. This book explores the nuts and bolts of the identity politics that characterise nowadays our universities, but also increasingly Western society at large. The Ideology of Failure explores the problem of how people with good intentions are unknowingly setting up a generation for failure.

‘For fans of Conservative polemicists such as Ben Shapiro, Douglas Murray, Jordan Peterson and Milo Yiannopoulos, The Ideology of Failure is a knockout, slamdunk attack on the PC police, carefully structured and argued for maximum effect. Nearly every sentence is quotable, and Leonard’s specialism in linguistics (the author is fluent in several languages) makes for a poetic and fluid narrative, Country Squire Magazine

‘Any scepticism a reader might initially feel about the melding of Leonard’s natural expertise (he is by trade a linguist and ethnographer) and the realm of politics is quickly dismissed by the immense erudition demonstrated by the text’, The Burkean 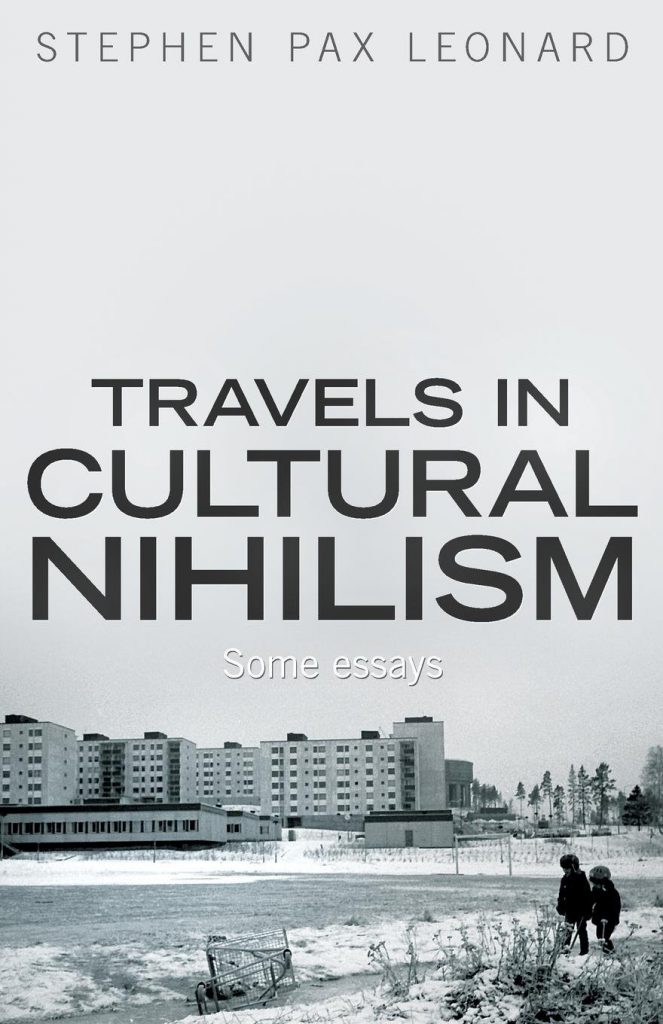 Travels in Cultural Nihilism is a philosophical travelogue that takes the reader to Ukraine, the High Arctic, France, UK and Sweden. Through the lens of Nietzsche’s nihilism, the book describes and and analyses the diverse tensions in these different places. Travels in Cultural Nihilism is required reading for those hoping to understand the complexity of problems that twenty-first century societies face.

‘Journeying through this troubled intersection of politics and culture, Travels in Cultural Nihilism might make the reader cry, fume and even laugh. By the end, though, such contradictory reactions seem salutary and necessary, matching the spirit of the times and perhaps even adding up to an enlightened journey we all need to experience’, The Burkean. 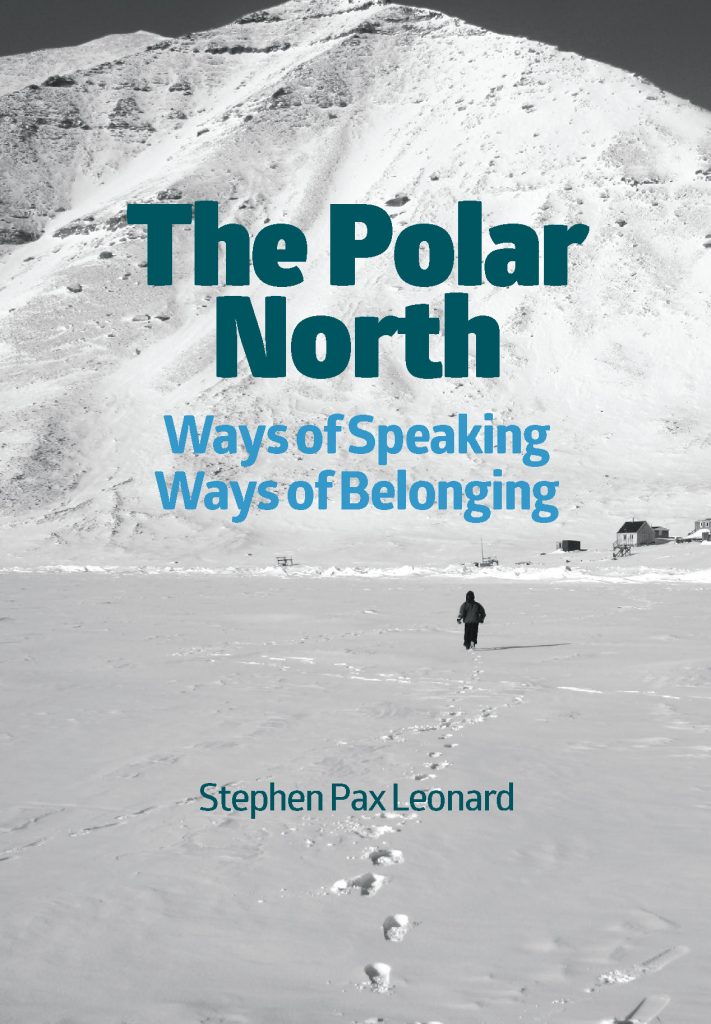 In 2010, Leonard set off on a journey to document the language and spoken traditions of a small group of Inuit living in a remote corner of north-west Greenland. As a teenager, Leonard had read about the Inugguit through the accounts of the explorer, Sir Wally Herbert who lived in the region in the early 1970s. Travelling with hunters out on the Arctic sea ice, he followed in Herbert’s footsteps and discovered another world entirely, a way of life more or less unchanged for a thousand years. Living such a simple life in a pre-industrial society at the top of the world, Leonard came to understand the Inugguit’s privileged take on the busy, overpopulated world that lies beneath them. This is the account of Leonard’s year living with this remote group in the High Arctic.

Nominated for the William Mills Prize for non-fiction polar books.

‘This is a brave book in the long history of explorers in the Arctic. It is evocative, poetic, and critical’, ARCTIC Journal

‘The Polar North is a refreshing combination of linguistics, anthropology and beautiful story-telling’ The Times Literary Supplement 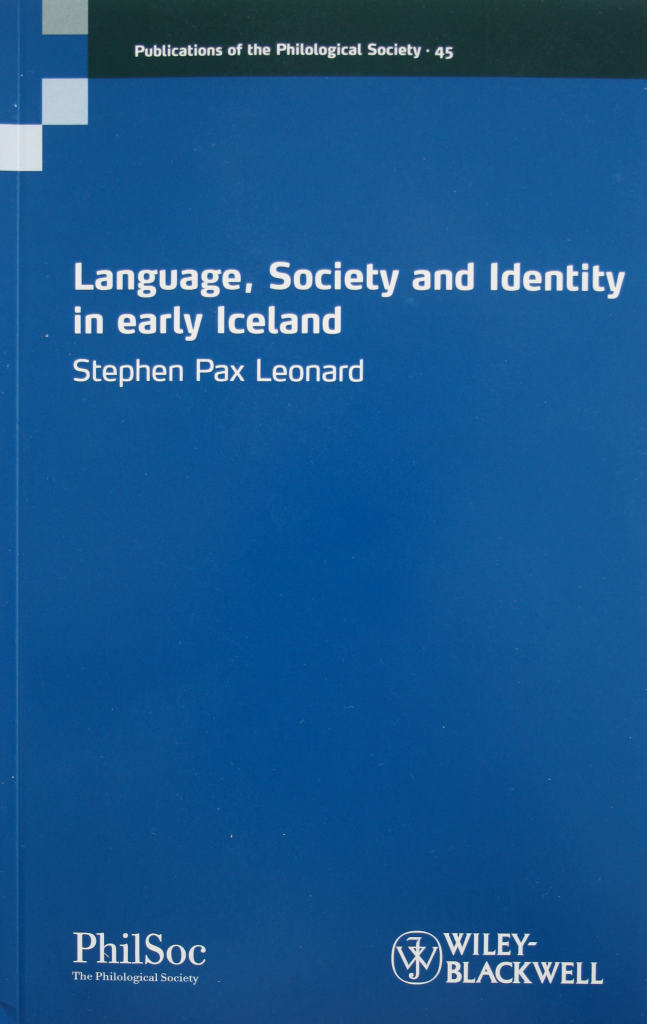 Using the most recent sociolinguistic theory, and drawing on history and archaeology, Leonard explores some of the reasons for the unusual development of the Icelandic language, showing how the Icelandic identity developed through the establishment of social structures and their literary culture. With its rich literature, the language became the single most important factor for the identity of the Icelanders. Language, Society and Identity in early Iceland is a fascinating account of an under examined historical-linguistic story that will spur further research. In particular, it leaves a trail for those concerned with language and identity in Iceland today, where there is for the first time unequivocal evidence of sociolinguistic variation.

‘Leonard’s is an exemplary illustration of how linguistics and other aspects of cultural history can inform each other insightfully. The study should be accessible and interesting both to readers interested in questions of language and identity formation in ‘new societies’ in general and to those interested in early Icelandic society’, Sociolinguistic Studies 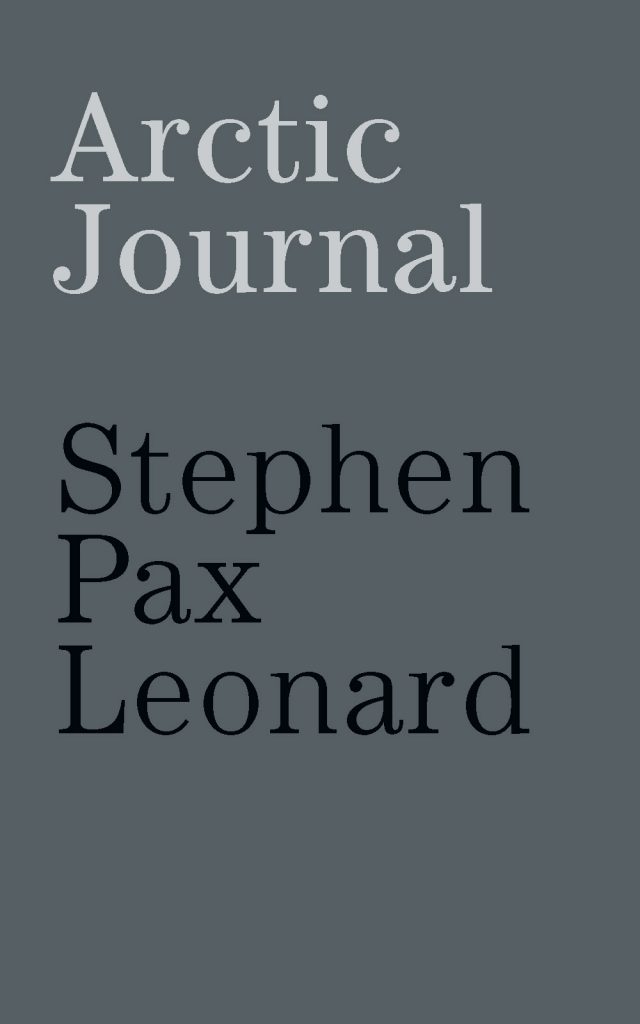 Arctic Journal is one long poem that was written during the year of 2010-2011, much of it during the Dark Period when there is no sun at all for three and a half months in north-west Greenland. Living alone in three different remote Inuit settlements for a year (without leaving the region), the Arctic Journal is Leonard’s response to the transient Arctic landscape, the transcendental voices of the hunters blurring the poet’s insider/outsider distinction, the intimacy of the enmeshed natural and human environment, the vicissitudes of life in the polar desert, the liberty of thought that the open spaces of the North offers, the awakening of primordial intuitions, the isolation and solitude, but also the troubling human environment seen through a very subjective lens. 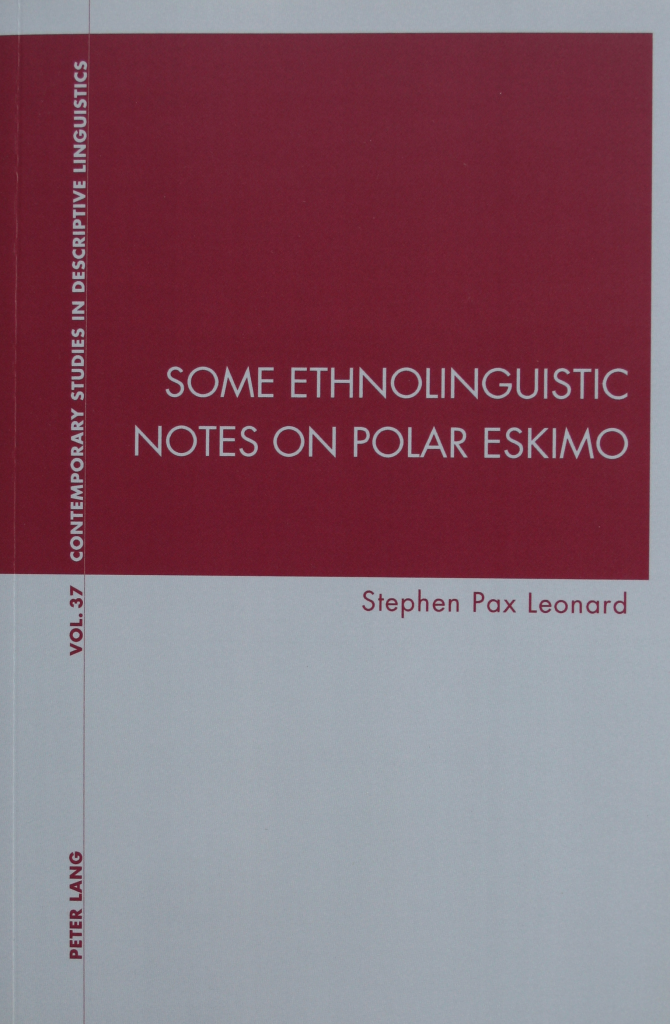 Some Ethnolinguistic Notes on Polar Eskimo

This book serves as an insightful, ethnographic introduction to the language and oral traditions of the Inugguit, a sub-group of the Inuit who live in north-west Greenland. A unique work, it encompasses an overview of the grammar of Polar Eskimo – a language spoken by about 770 people –, as well as a description of their oral traditions (drum-dancing and story-telling) and the most extensive glossary of the language compiled to date. The book presents the Polar Eskimo language in the orthography established by the author in conjunction with the local community in Greenland: an extremely difficult task for a language made up of such an aberrant phonology and with no written tradition. By exploring their ways of speaking and ways of belonging, Leonard provides a highly original ethnographic interpretation of the nature of Inugguit social organization and their world-view.