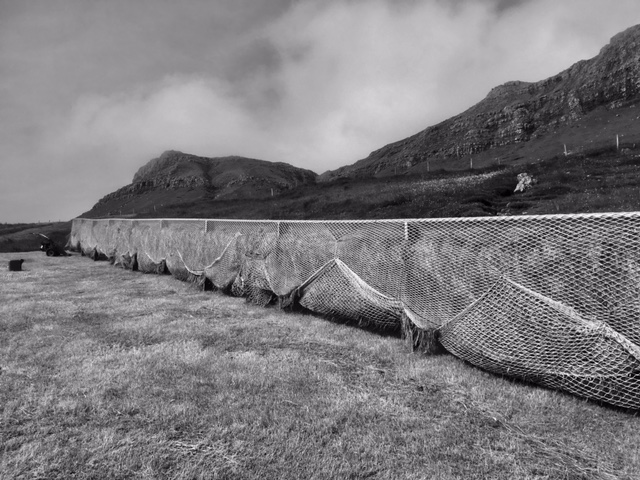 Posted at 17:45h in Uncategorised by Stephen Pax Leonard

Harvesting grass in the Faroe Islands

July is the time of the hoyggja which refers to the cutting of the in-field (bøur) grass and harvesting it for the sheep’s winter feed. Families are outside; their cheery voices drift in the wind. Children’s laughter sweeps across the fields. There is noise everywhere. Flies hum heavily. I hear the haunting curlews, the ghosts of dead boys, on the horizon. The air tremours with their distinctive call. High up on the mountain ridges, skuas defend the spines of the hills. A woman’s brassy voice can be heard jabbering from a nearby window, her sentences shrinked to disconnected words. There is the sound of scythes being whetted. Radios are perched on the stumps of fence posts. Their aerials waltzing in the wind. Music plays. Dogs bark.

Leaning on two-tined pitch-forks, elderly men with creased brows stand around exchanging gossip. Their voices dangle in the light breeze. The farmers nod as they listen to an account of a wet harvest two score years ago. They square their shoulders and lower their tones as the lay-reader shuffles by, his shoes grinding on the gravel. Then the conversation turns to lawnmower designs. They all swear by a certain liver-shaped Italian brand that is used to negotiate the very uneven ground of the steep slopes. But first the long grass has to be scythed. With scythe in hand, I cast a glance over the hills and see elderly men scything with obstreperous grandchildren at their feet collecting the grass. This rural scene, this summer idyll could be from a hundred years ago. Further up the bank where Gudmund and his extended family are at work, Stein from Hvalba talks endlessly about the huldufólk (‘supernatural, elf-like spirits to be found in the Faroese countryside’) of Lítla Dímun (the uninhabited island without electricity where sheep are taken to graze in a smack). His conversation turns to the intertwining of the visible and the invisible, the material and the spiritual. The places where the stones speak to the ocean. Families battled over ownership of Lítla Dímun, this tiny nipple of basalt in the mid-Atltantic, for many years. In the end, a cooperative of 48 farmers from Hvalba bought the island and still keep their sheep on this mysterious, unsettled outpost. The talk switches to politics, parliamentary squabbles, fishing quotas and the dead. Telling stories seems to be an essential part of hoyggja. It is a time to meet with friends, laugh, pass on memories from previous harvests and of course prepare the grass. Then, orders wrapped in a shower of expletives are barked at Stein and it is back to work. The people of Suðuroy (the southernmost island that makes up the archipelago) are known for their expressiveness, their sometimes crass language, operatic nerves and the way they wave their arms around when they speak.

It is a dry summer’s day and we are busy raking the grass and placing it on long drying racks (turkilagar) that line the hilly pastures running from top to bottom. Flocks of starlings feast noisily on clews of worms that are revealed as the rake drags across the earth. Covered in nets, the grass is left to dry on these racks in the wind. It is imperative that the grass is dried as much as possible before the rain comes which can be taxing in the Faroes. More than the rain, the farmers fear fog and windless days. Providing there is wind, the grass normally dries even if there is the odd shower of rain. This summer has been rather dry and the farmers are hopeful that we will have a good harvest of hay to feed the sheep over the winter. Sunshine has been forecast for the whole week and all going well the grass should be sun-bleached in ten days or so. If the grass gets very wet, it turns into a soggy mush, a useless liability and a rotting curse. Nowadays, it is less important than it was before. Almost no farmers are dependent on just sheep anymore and some now have silos to make silage. Previously, a wet harvest could have had disastrous consequences. This is the last day of harvesting the grass to make silage. Everyone is helping out to make sure the job is done. Aside from the grass that is being dried the old-fashioned way, this grass will be stored in airtight silos and fermented using formic acid and water. Men tread the grass in silos as if it were grapes; they try to squeeze out as much of the air as possible. There is little baling here for the ground is so uneven and the slopes are so steep. That must in part explain why farming methods are barely unchanged.

After a long, hard day in the fields, we are fed ræst kjøt at Gudmund’s house. Ræst kjøt is lamb that has been air-dried for several months and then braised for 7 hours. With few trees and no salt production due to adverse weather conditions, the Faroese were not able to smoke or salt meat to preserve it. The pungent smell of ræst kjøt, somewhere between a veiny cheese, lamb and wool hits you as you enter the kitchen. The meat is served with root vegetables. The meat comes from the sheep that were slaughtered in September. Gudmund sells the meat privately to local people and distributes the rest to his extended family. Almost all the meat is eaten air-dried. The Faroese love to eat their food prepared in this fashion.

Dinner finished, we stand outside on the veranda. The air is crisp and fresh. I used to tell visitors to the Faroes ‘when you land, stand on the tarmac for a minute and just breathe in the air’. It feels so clean and perfect. Tonight it tastes of the sea. The view over the green slopes and the principalities of sheep that border the fjord could only be the Faroes. The gullied hills, the vestiges of a glacial age, wrinkle the bare lead-coloured rock. Houses, painted the colours of the rainbow, hug the bay. As is often the case this time of the year, the colours of the fuschia-coloured sunset have invaded the sky by the rounded peaks that cradle the fjord. The Trongisvágur valley looks like an oil painting with the evening glow gushing across the horizon. Gudmund tells me repeatedly how he loves this view. The Faroese take great pride in their country. Elderly women in the village would often be seen photographing their landscape even if they had spent their entire life there. They never tire of its beauty. Late in the evening, we retire under the scattered light of the fading sun to homes warmed by the summer sunshine and to kitchens alive with radio noise.