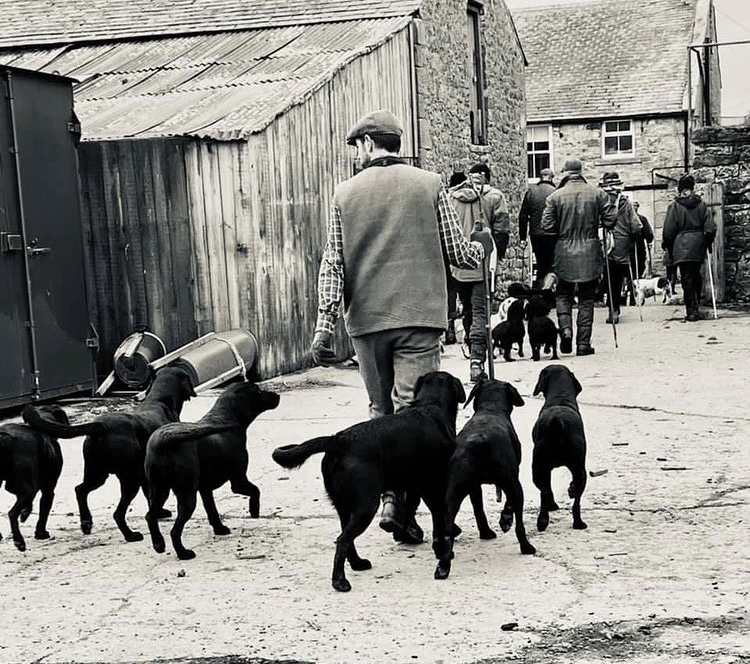 Posted at 19:23h in Uncategorised by Stephen Pax Leonard

The sky was tawny; the late afternoon frosty and brittle. The fields crunched as the shooting party of Byronic heroes walked across the spines of the hills enjoying some light-hearted repartee. Percy cum-Banter had spent the day on a shoot on the Scottish borders. Not one of those ghastly commercial shoots with appalling practices of burying birds at the end of the day, but a small-scale affair with a handful of rather flippant ‘guns’. Pheasants exploded from the cover catching the guns off-guard, all of whom were busy engaging in silly wagers. This was not be an altogether serious affair.

Percy was a picking-up newbie, and the memories of those shoots stuck with him forever: the corrosive wit of the gamekeepers, the eccentricity of stone-death ‘Lordie’ who would bellow out the briefing and always quite inexplicably call him Keith; the oddities of shooting etiquette; the extraordinary class segregation of it all – the guns and the beaters standing apart during elevensies with the occasional ‘gun’ breaking ranks and offering the beaters a pheasant and chorizo roll. At lunch, the beaters were packed off to the gamekeeper’s lodge with some hot soup and bread whilst ‘the guns’ quaffed vintage champagne and tucked into their Escargots à la Bourguignonne in the Edwardian dining room of the manor house. At the tiny gamekeeper’s lodge, there was much laughter as the beaters poked fun at St John, one of the elderly guns whose shooting had become somewhat erratic now that he was almost 90. Standing in a circle around the wood-burner, the beaters wore ties featuring snipe and were dressed head-to-toe in Harris Tweed. Percy was in the company of gentlemen.

Over lunch, Angus, the head gamekeeper, would push a dram into Percy’s chest and with a broad Scottish accent say: ‘Percy, oold boy, with an accent like thet you shoold be loonching with Loordie and goons, not henging aroond oos rriff-rraff’. But, Percy was quite happy amongst the beaters. They were all tremendous fellows and lassies: witty, light-hearted and risqué with their salacious gossip about ‘Loordie and his animal husbandry’. Percy was here to see how the dogs worked (one of his passions), and the control the beaters had over their dogs was remarkable.

Only two hours later would the guns emerge from luncheon in the manor house, hugely bloated. At the end of the last run, Lordie would crush Percy’s hand and say ‘Keith, old chap, could you make do with a brace of pheasants?’ Yes, those were memorable days indeed for Percy. The bags were always small, but what fun!

Percy was now bouncing around in the Landy, happy as a sandboy, navigating the beauty of Northumberland’s back lanes. Chet Baker played on the radio. On the way back from one of these shoots he popped into Durham where he had been invited to attend a ‘poetry evening’ at one of those quaint, little Colleges on the Bailey. He had been a student there in another age entirely. Now, rainbow flags were draped from each window and tampons were handed out to the inter-sex groupies at Freshers’ week. This seemed like a different world entirely from the cheeky banter and high-spirited laughter of the shooting parties.

No more Yeats or Eliot, the poetry was pure protest material, a few vers libre of social justice drivel written by an anchorite who thought the rainbow was still a symbol for children but who had been alerted to an opportunity in the publishing market. After the ‘poetry’, dinner was served: prisoners’ food comprising mounds of starch and vinaigery plonk that even made the students grimace. Percy was sat next to the Principal, a woman who had been apparently intoxicated by these winds of novelty. Like many failed academics she had become an overpaid administrator who spoke the corrupted SJW language: ‘safe’ were green-haired, non-binary Labour voting folk; ‘dangerous’ were Tweed clad Tories; ‘inclusive’, ‘diverse’ etc.

The conversation over dinner was about a forthcoming lecture series on ‘white, heterosexual privilege’ that she was hosting. Sat opposite, the Chaplain, a completely bald fellow with a rainbow-coloured lanyard hanging from his neck, chipped in with: ‘25% of our community are LGBTQ now [a big grin of achievement]. We would like to get it up to 50% and create an even more thriving diverse and engaging environment’. Yes, I bet you would, Percy thought to himself.

Thankfully, after dinner Percy found in the Common Room a fellow-traveller who was drowning his sorrows in port. Archie was a lone voice amongst groupthink apparatchiks. Once a philosopher, the retired gentleman shook his head and whispered to Percy that many of the students were tired of the constant social justice propaganda and the insistence on conformity of values. They were white and middle-class, and were now the subjects of hate campaigns. They had hoped to go to university and be exposed to lots of different ideas, philosophies and anthropologies, but instead they just got ideological lessons on male menstruation, discussions on decolonising higher education, white privilege and social justice orthodoxy.

In an attempt to lift the gentleman’s spirits, Percy told him about his day on the Scottish borders. His eyes lit up. He too had spent much time amongst the witty, stiff upper lip shooting enthusiasts and could not help comparing them to the SJW automata who always had to blame society for their shortcomings instead of just getting on with things. He alluded to the genuine humility of those living ‘out on the hill’ and the false humility of those who had never lived in the ‘real world’; the openness and freedom to jest and wit of the gamekeepers and ghillies and the ideological prison in which some British academics felt stuck.

‘Percy, my boy, academia in Britain has become tribalised, but many members of the tribe are suspicious of the group’s specious hypermorality’, the retired philosopher whispered. ‘They know it is groupthink ideology and recognise that if they speak out against it, they will be dropped and ostracised’ he continued, cocking his head over his should to make sure nobody was listening.

‘Instead of rising above the herd, they would prefer to enter a Faustian pact with the academic administrators whose meek, hug-a-friend Christianity is only intended for the minorities. These intellectuals who tragically refuse to speak out are imprisoned in a false consciousness, and would benefit greatly from the independent thinking and freedom of the ‘men of the hill’, he held forth. Percy nodded and nodded. As the Principal entered the Senior Common Room, the two men looked at their watches. ‘Cancel the College direct debit donation’, old boy. ‘Believe me, it is not worth it’, said Archie. ‘I already have!’, grinned Percy.

The night having already drawn in, Percy and Archie hopped into the Landy and headed back to the hill to forget that there were such things as ‘racial guilt’ and ‘white privilege’, and to be again amongst the company of gentlemen.