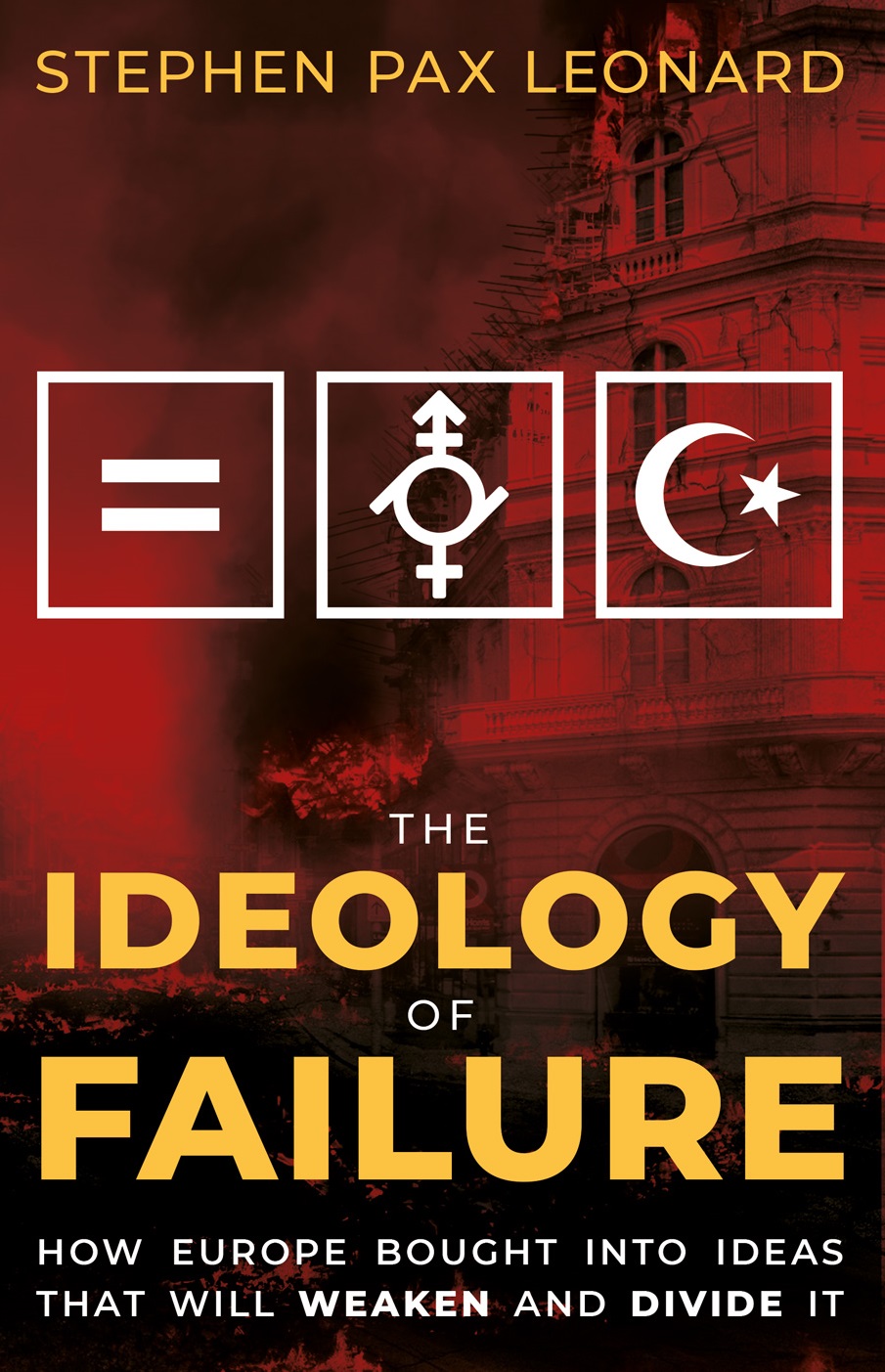 Posted at 08:44h in Uncategorised by Stephen Pax Leonard

The Ideology of Failure

When researching Stephen Pax Leonard, the author of the 2018 Conservative polemic The Ideology of Failure: How Europe Bought Into Ideas That Will Weaken and Divide It, I couldn’t find any reviews of the book. In my search however, I found articles from 2018 about Leonard’s unpaid Research position at Durham university being cancelled after he allegedly posted Antisemitic and Islamophobic tweets, which have since been deleted and it seems were doctored. Having now read The Ideology of Failure, it seems obvious that the leftist movement in UK universities deliberately smeared Leonard’s reputation.

Political correctness has moved far away from its original good intentions and has become an attempt at manipulating language and thought in order to prevent people talking about the things that matter. It is a mental and moral trap that attempts to stop people thinking for themselves. Say the wrong thing, and one drowns in the waters of moral fear. Seen in this light, political correctness is the scourge of our times.

Fuelled by a righteous anger, Pax Leonard’s book is required reading for anybody who is becoming increasingly annoyed at the Regressive Left and their evidently fascist strategies.

In academia, political correctness and the academic fad of postmodernism lies at the vortex of creating degrees in phoney departments such as Women’s Studies and Gender Studies, subjects which have a highly politicized agenda and which employ fake academics who work on issues of non-binary gender theory and who invariably have both a personal and ideological axe to grind.

For fans of Conservative polemicists such as Ben Shapiro, Douglas Murray, Jordan Peterson and Milo Yiannopoulos (who is quoted in a title epigraph) The Ideology of Failure is a knockout, slamdunk attack on the PC police, carefully structured and argued for maximum effect. Nearly every sentence is quotable, and Leonard’s specialism in linguistics (the author is fluent in several languages) makes for a poetic and fluid narrative. The reality that the left can’t seem to grasp, despite the influx of successful Conservative protest books, is that those on the right are simply espousing common sense, while those on the left are becoming increasingly deranged with cancelling political voices that argue against their nonsensical belief in equality for everybody except straight white men. Leonard is a first rate academic, and much of the book concerns the fate of Sweden and its influx of migrants that led to the mass rape of Swedish women and children that the Swedish media neglected to report due to the government’s inane white guilt. He also covers the open door migration policy that has devastated France and Germany.

The author is a defender of Trump and Brexit, and dismisses the charges of racism aimed at the former US president, arguing that the truth is that Trump was an anti globalist politician, which was also the reason for the Brexit vote. Obviously it was written before Trump’s ignominious fall from grace, and the generally accepted belief that Trump was one of America’s worst presidents.

Politicians must rediscover their mettle and state the obvious… …multiculturalism has been a hideous failure, political correctness leads to self censorship, cultural repudiation is nihilistic and serves no meaningful purpose, the EU oligarchic project that has convulsed Europe has for many nations simply not worked… Politicians aside, what we all as individuals must do is ‘speak out’. We must smash the groupthink and speak up for what we believe is right.

Taking a realistic view of the migrant crisis plaguing Europe, Leonard concludes that unless the migrants are willing to integrate into their adopted countries, by learning the language and bringing necessary skills to the workforce, then the continent is doomed to violent chaos. He suggests a system like Australia has, only allowing in those who can bring necessary work experience and talent to the country. The sickening reality is that terrorists are sneaking into Europe in order to destroy Western civilisation and creating a society based on Sharia law, in which women must be covered and homosexuality banned.

Stephen Pax Leonard is a very intelligent writer, but this book has a somewhat vague climax giving little actual advice on how Conservative thinkers can fight back against the postmodern left. Like Shapiro, Peterson, Murray and Yiannopoulos, he seems happy enough to leave that strategy to someone else.

The book is available at: