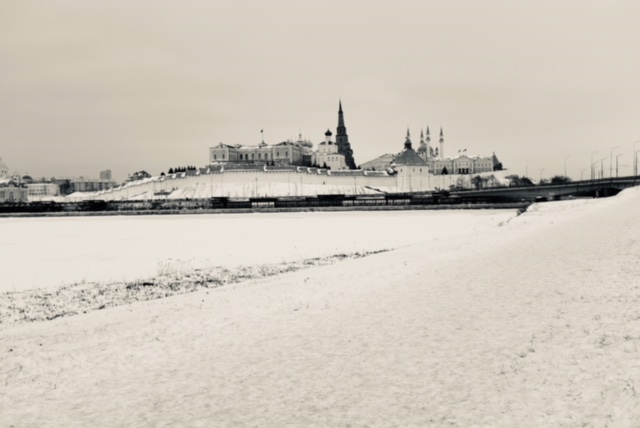 Posted at 17:43h in Uncategorised by Stephen Pax Leonard

A bare-chested man gazes out of the window watching the queue of passengers that wait on the platform to have their travel documents inspected. Content his entourage have made it onto the train, he walks towards me down the extremely narrow corridor that runs alongside the four-berth couchette compartments. His bulk is impressive and sufficiently large that it proves impossible to pass in the corridor even if we both stand sideways and breathe in. Nonetheless, he tries to squeeze past. Anxious to avoid getting coincé amidst layers of white fat, I retreat back down the corridor under his smoky breath. Poker-faced, he passes me with a sulky grunt not wishing to see the funny side of the encounter.

We have just boarded the night train to Kazan and everybody is anxious to find their compartment and get settled in for the evening. It takes thirteen hours from Moscow which is a relatively short journey in Russian terms. I say ‘we’. I am travelling with my two year old spaniel. Travelling with a dog comes with its challenges, but he is warmly received everywhere we go. When travelling on the night train with a dog you have to buy the whole compartment, i.e. four couchettes instead of one. Families of six on their way to Kazan to celebrate Orthodox Christmas on the 7th of January are jammed into the cramped, adjacent carriages of the same size. Endless parcels of tin-foil wrapped homemade food are unpacked and shared. Sprawled out across the leather seats with my spaniel at my knees and the leftovers of the New Year’s Eve caviar on my lap, I feel like a pre-revolutionary Russian aristocrat in comparison. You might be excused for thinking that I am travelling in some kind of luxury, but the Russian Railways’ loos are on a par with Connex South Eastern on a bad day and these second class compartments are rather basic. There are no gilded dining cars with their sounds of shaken glass; a short queue of men in slippers soon forms at the one socket to charge their mobile phones.

The train lurches and the dimmed compartment lights brighten. The frenzy of Moscow floats away from us as we trundle east. For us foreigners at least, these trains have a Soviet nostalgic appeal. Tea is brought to you in a fancy metal tea glass holder – enabling you not to burn your fingers – called a podstakannik by a stern-faced conductor (provodnitsa) whose tiny half-compartment lies at the end of the corridor. Two provodnitsa are responsible for each carriage and their tasks might include: making and delivering tea, sorting out the passengers’ bedlinen, maintaining the coal-heated samovar, collecting and returning train tickets and giving out information on the vast train timetable which covers seven timezones but that all runs on Moscow time. Train journeys can take up to a week in Russia and it makes sense to be on good terms with your provodnitsa as they not only bring you tea but take away your travel documents until you leave the train. For those people travelling alone, they will spend the next few days in overflowing vagon sharing everything with complete strangers and perhaps the provodnitsa too.

We edge slowly through the blackened Russian countryside in the thick of the night. Eager to see something other than Soviet era pre-fabricated tower blocks, my forehead rests on the cold window. All I can see is the transparent reflection of my own features. The swaying carriage and rhythmic shudder of the train soon send Stan and I to sleep. Shortly before midnight, the provodnitsa knocks on the kupe door. The train has stopped. We will be here for ten minutes and I take Stan out onto the unmade Zhivagoesque platform where the latest snow swirls in the wind. The snow is deep here. A few late night hawkers sell a variety of Christmas decorations: baubles with embossed images of Putin and hanging matroyshka. Back on the train, I awake in the morning to the sound of the familiar rattling of the podstakannik being delivered to my fellow passengers up and down the corridor. This is a nation of tea-drinkers and my co-travellers seem to drink endless cups of tea. I open the blind and before me are snowy forests of birch and the occasional near-abandoned, ramshackle village of piecemeal dachas with their characteristic high mansard roofs. The villages recede into the distance and we idle into the sidings at Kazan.

Sitting on what was the historic Siberian trade route – an artery that connected Siberia with Moscow –, Kazan remains a fascinating transit of cultures. It is particularly conspicuous in its show-casing of all things Tatar. Tatar flags fly ceremoniously across the city; the main thoroughfare (Bauman St) is a strip of Tatar restaurants, souvenir stands and shops selling local foods. Tatar cuisine is quite distinct from Russian and all manner of fares are on display: chak-chak (honey-drenched sweet pastry balls); kazylyk (air-dried horse meat sausage); kaklagan gaz (air-dried goose); bear meat snacks and boxes of talkysh kaleve (pyramids of threaded honey and sugar). At the end of Bauman St., the kremlin houses the city’s architectural splendours including the Cathedral of the Annunication juxtaposed to the Kul Sharif mosque which at the time of its completion was the largest mosque in Europe. Inside, the prayer hall is a plain hexagon of marble. In one of the corners, a cleric sits in a glass panelled cubicle reading from the Koran as Chinese tourists video him on their Smartphones. Nestled between the cathedral and the mosque is the tiered and notably leaning Söyembikä tower. Its history is intriguing and very Russian. It is said that Ivan the Terrible fell in love with a woman and built what was at the time the highest building in Kazan as a symbol of his love. She climbed up to the top and threw herself off.

Beyond the kremlin, Kazan is a mix of attractive parks, crumbling mansions, neo-classical theatres and frozen lakes. In the parks, decorated with statues of prize-winning mathematicians, young newly-weds hang locked padlocks on the bridges as a token of their love. Having been dragged by a spaniel through all the parks, I warm up in cosy cafés and make conversation with strangers: Turks, Uzbeks, Tatars, Russians and Ukrainians. It is here that I discover the delights of green borscht (sorrel, not beetroot based) and echpochmak (a kind of small triangular Cornish pasty) whilst discussing the notable people of Kazan: poets, Soviet fencers, cellists, models and the wife of Salvador Dali.

Satisfied that I have exhausted the attractions of the city centre, I decide to take a taxi to Raifa Bogoroditsky monastery. The monastery lies in the forest beyond the city and has served believers since the 16th century. It is the 6th of January, Christmas Eve for Orthodox Christians (the Orthodox church observes the Julian calendar) and the traffic is heavy. Normally a place of silence and solitude, the monastery has attracted today (unsurprisingly) a heaving throng of worshippers inching towards the cathedral under a leaden sky. Raifa is a complex of attractive temples and bell towers. The semantron and then the bells – blessed, consecrated and icons of the voice of God – ring out across the wintry woods. A number of cats which have made their home here scatter amongst the crowds. Queues of head-scarved women snake around the cathedral, waiting to kiss the icons. They move like chess pieces between relics lit by lamps and candles, kissing the glass and then quickly rubbing away the mark. A silent, congested train of people in the narthex fill out prayer slips, writing the names of the living (red slip) and the dead (black slip) that they want the priest to pray for. Keen to escape the crowds, I go to the adjacent temple. A clowder of cats skulk on the steps. Inside, a male choir of basso profondo rehearse the low notes in preparation for the All-night vigil tonight. At the entrance to the chapel, I meet Dimitry, the monk responsible for the cats. In return for looking after the rodents, the cats are fed and receive blessings as he walks amongst the ancient buildings sprinkling holy water. ‘We do this every day. They are very blessed cats’, he offers and with a laugh rejoins his fellow choir members.

Having queued to visit the tiniest chapel with room for just seven people, I leave the monastery complex, passing the impressive ice sculptures of shrines and make my way back to Kazan. The heavy traffic has become a ten mile traffic jam. With his flowing chestnut beard, my driver, Sergei, has the look of an Orthodox priest. He is in his mid-thirties, Russian, and has spent his whole life in Kazan. He says with a deep sigh that the propka (traffic jam) will result in a long journey. But he has a plan, and asks my permission to take the scenic route. I am only too pleased. Sergei has a twinkle in his eye and tries to disguise a half-grin. Coming off the motorway, he takes us through small villages comprising a mish-mash of worn dachas pieced together with whatever materials were available. They look how I imagine my house to look if I were let loose with my DIY skills. The dacha lined streets soon become grey suburbs of totalitarian architecture and built ideology – Soviet housing blocks with their cold war narratives huddling on the verges of the Volga. Sergei’s half-grin becomes a chortle as we turn off into an unmade track littered with rusting machinery. The track drops sharply and the car meanders on the ice. A few chassis-reshaping thumps and then we are driving rather suddenly on the frozen Volga river. Beaming, he looks at me and says это россия (‘only in Russia’).

Clinging perhaps to a nomadic ancestry, groups of Turkic looking men fish through the ice. They seem a little surprised by our ungainly entrance. I have driven across frozen sounds in Greenland when it was -30 degrees, but would think twice about negotiating the Volga in a Lada in one of the mildest Russian winters on record. It is -4 degrees and my eyes are fixed on the patches of grey ice. Flashbacks of conversations with the Inuit about the dangers of the thin grey ice race through my mind. We share a nervous laugh as the Google maps on his iPhone spins in confusion. This is the first time I have been taken off-road in an Uber. We follow a well-worn track across the ice and traverse the smooth, frozen river with minimal fuss. Thankfully, for I was not hopeful of our Lada turning into a Bond-like ‘Wet Nellie’. A few grinds of the gearbox, up an icy embankment and before we know it we are again amongst the golden onion-domes and minarets of the Kazan kremlin.