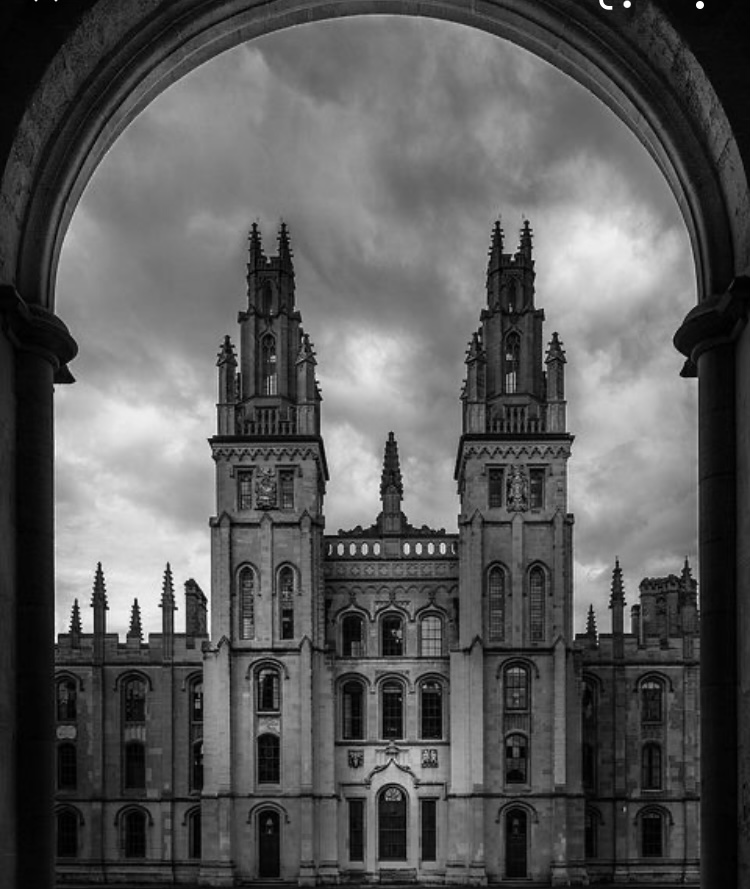 Posted at 08:00h in Uncategorised by Stephen Pax Leonard

Published in the Country Squire Magazine

Mr Ambiguous-de-Spode sat in the Fellows’ Common Room at All Souls College or The Warden and the College of the Souls of all Faithful People deceased in the University of Oxford for short, browsing the photographs of the Country Life débutantes, feeling rather pleased and upbeat about things. He was trying to bring to an end an extended coffee break after having spent the morning in the ‘Cod’ reading vernacular Dari poetry chapbooks. Soon, it would be time for luncheon.

He could see the dining room was flooded with light and fresh warm air. He looked upon the appointment of the luncheon table with relish. He took the freshly ironed The Daily Telegraph from under his arm and cast his eyes at the headlines. ‘All lives matter’, he mumbled as he crossed the Quad whose pelouse was bright with dew in the morning sunshine. The words died instantly on his lips as he bumped into one of his Brasenose students: a young lady of colour, a brilliant mind, already an authority on the Mahabharata. Surely, she would think this a micro-invalidation for these words might be perceived not to take into account inherently insidious systems of power and privilege. How would he negotiate the silence of coercive psychological barricades, hostile borders and prickly peripheries that might now ensue? He essayed to speak without success. Then, he managed: ‘Oh, I am sorry. It wasn’t intentional. I don’t suppose you have read this morning’s news?’ But it doesn’t’ matter if it was unintentional. Micro-aggressions can be intentional or unintentional, he thought to himself.

‘I don’t suppose you have read this morning’s news?’, repeated Agatha. Oh, dear. It was another micro-aggression. This could be perceived as an unintentional slight revealing the supposed unconscious bias of the tutor, a sense of hidden hierarchy. He feared how the ‘conversation implicature’ might be interpreted by Agatha. Spontaneous, casual conversation like this had become a dangerous business. He needed to retreat to a more private realm.

Things were changing. Where was the magnificent marmelade jar that used to furnish the breakfast table, where was the Frank Cooper’s? Where was the armadillo shell bearing the fruit, served after second pudding (or more correctly ‘dessert’ after pudding on High Table) in the soon to be renamed Codrington Library? Where was Mrs Crumpetshire with her shaving bowl? Now, jokes might be perceived as micro-insults. Laughter or ‘extra-linguistic behaviour associated with ridicule’ as Professor Tonic-with-Gin, a colleague and proponent of micro-aggressions recently termed it, is risky stuff. Each week at Governing Body, T-w-G would raise the issue of environmental micro-aggressions and the absence of a loo for gender non-conforming individuals at the College.

In the 1950s and 60s, Oxford philosophers such as Austin, Grice, and Strawson were interested in the question of how we communicate more than we say and what the impact of these statements might be. According to Grice, a so-called ‘conversational implicature’ depends not on the meaning of the words employed (semantics), but on the way the words are interpreted (pragmatics). Semantically, ‘all lives matter’ means that the lives of all ethnic groups matter. But, pragmatically, the implicature might be that the lives of white people matter as well as those of people of colour, and this may serve to deflect attention from the slogan which came about due to the brutal mishandling of a person of colour by a white person in a position of power in America. ‘All lives matter’ appears normally in response to the utterance ‘black lives matter’ and thus may be perceived to be an attempt to downplay or delegitimise the BLM movement.

The list of potential micro-aggressions, micro-invalidations, micro-insults and micro-assaults is in fact endless. In the context of an Oxbridge College, a tutor and Fellow of colour could surely claim micro-aggression when he is expected to address the white Head of House (such as at Governing Body meetings) as ‘Master’ (the title for many Heads of House at Oxford and Cambridge). Conversations between tutor and student (the heart of the Oxbridge teaching system) could also be problematic for the tutor might unwittingly refer to his or her superior knowledge in this field or that. A phrase such as ‘I suppose you haven’t read this, have you?’ uttered to a student of colour could be perceived as an unintentional slight. If we are going to police ‘conversational implicatures’, parts of the lexicon would have to be considered taboo. Depending on the context, the word ‘just’ is surely problematic in the phrase ‘so, are you just going to quote from Joyce?’ In reality, any notion of hierarchy is problematic for this speech code. What this boils down to is that if you make a statement that is not aligned with all the assumptions underpinning the social justice ideology, then you risk being accused of micro-aggression. These mechanisms are not there to help the marginalised; they are there to enforce an ideology. The perception of microaggressions is ideologically driven rather than identity driven. Their proponents are all ‘progressives’. There is the first clue. Ironically, if you are in the business of promoting fairness and equality, you are more likely to use a micro-aggression as by even talking about equality you might be perceived to be reinforcing the supposed inequality by having to make reference to it.

It was never going to be long before the social justice ideologues occupied the territory of pragmatics. Any powerful ideology needs to have some control over language use. Micro-aggressions work on the basis of a supposed universal truth, that corresponding to the narrative of the social justice ideology. There is no defence, and micro-aggressions can be verbal, non-verbal, visual, behavioural and environmental. A university such as Cambridge which recently back-tracked from introducing an oppressive micro-aggression surveillance system is arguably full of environmental micro-aggressions: the student of colour being the sole non-white person in the Junior Common Room; the buildings that are named after white people; the College Boat Clubs full of cis-gendered folk. The Vice-Chancellor of Cambridge, an administrator, tells us that ‘raising an eyebrow’ should be considered a micro-aggression. Had he been a don, the wonderful Roger Moore would have been in deep water.

Colleges in the US have had formal systems to allow students to report faculty microaggressions for some years now. Inevitably, the flotsam has drifted this way. As with trigger-warnings, bias report teams (BRTs), inclusive language campaigns and safe-spaces, the original motivation behind micro-aggressions was undoubtedly a charitable one. However, the solution to alleged oppression is not more oppression. The solution should not be a framework of ‘Report + Support’ tools for the ‘progressive agitator’ whose only mission might be to pay lip service to his ideological commitments and get his tutor fired. Anyone can feign offence after all. Now that we live in the ‘pandemic era’, more and more classes and lectures are being recorded and made available online. This will provide data for the micro-aggressee that can be ‘shared’ on social media which can lead to fake outrage and all the by now familiar consequences. Academics at British universities should be concerned. Not only their language, innocent compliments, jokes and quips could be weaponised, but also their gestures and mannerisms.

This kind of verbal shackling and dehumanisation of language and gestures that micro-aggression policies invite is unsettling for historically it has been an instrument of brutal, totalitarian regimes. What is more, the result is not so much a ‘safer’ environment as a sterile, robotic one where ‘deviant opinions’ linger in toxic silence. Self-censorship is now the norm amongst British academics. One consequence of micro-aggressions and all these related measures is that dissent has retreated largely to the privately realm (which was presumably the intention), that is behind the dense crimson rhododendrons at the end of the College garden where intellectuals might still be able to speak freely without being savaged by a digital mob for breaking the unwritten speech code. Robbed of their rhetorical freedom, these men and women in their beetle-black gowns no longer possess themselves entirely. They are servants of the progressive ideology. Had they been a little more steely, they might have asked: why should only ‘progressives’ set the rules for conversation? Why do the microaggression advocates who want to live in a pluralist society not tolerate any perspective that is not their own?

In 1927, Julien Benda wrote about the intellectual corruption of his age. In 2021, I am wondering why more people are not writing about the intellectual corruption of our age. The values of knowledge, learning and open dialogue are being abased by bureaucrats who have been indoctrinated to believe their schemes will help bring about a more equitable society. They won’t. Through authoritarian means, they will simply turn universities into wastelands of ‘progressive’ groupthink because nobody will be allowed to engage with or speak about ideas they find offensive.

And so, having finally worked his way through all the légumes, Mr Ambiguous-de-Spode repaired to his rooms. He chatted briefly with the new manciple, M.M., in the pantry, and tried to place her accent. ‘Might I ask where you are from?’ The words just slipped out. ‘Dash’, he cursed. He flushed furiously. It was another micro-aggression. ‘Forgive me, forgive me’, he hailed, careful not to raise his eyebrows even though his face was transfigured with fear. Feeling quite out of sorts, he made off for his set, not risking talking to anyone else. In his rooms, he sat on the oxblood three-seater Chesterfield and gave a deep sigh. Looking down at his Labrador, he said ‘Thank heavens, I am an All Souls man’. ‘No students here, dear boy’. ‘But nemo est supra legis and all that. Nemo est supra legis’.